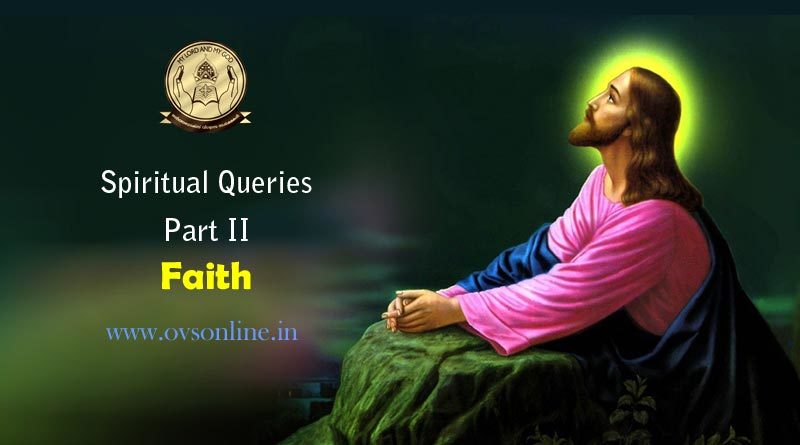 1) Compare the general meaning of Faith with that of spiritual?
Faith, in a spiritual sense reminds us the reality that “The Invisible is more real than Visible” (Hebrew 11:3). But in general, Faith is trusting in someone. Here To trust someone means trusting in any person, things or matter. This secular meaning itself teaches us the reality that we can’t always rely upon science in daily dealings for we communicate and depend each other (for food, groceries, transport, medical, dealings, shares or business between people and so on) on the basis of mutual trust especially in the Hippocratic world.

Thus without faith / trust, it is not possible to run even our secular life. If so how about our mental or spiritual life (stress, distress, confusions, decision making, attitude, behavior etc) as psychology states: “It Depends”; Hardly anything is true about the behavior and attitude of the people all the times: it depends on genetics, experience health, age , time, temperature, others response, emotions etc.

2) Can you express the meaning of Faith in simple words?
Please read St. Mathew 19:14 where Jesus illustrates who will inherit the kingdom of God; ‘Little Children’. They doesn’t need any scientific proof for anything to trust. They trust their parents; an unquestioning trust in their parents. Same way should be our Faith in God.

3) Trust / Faith – how can we define it with the view of an Atheist?
Though we use the words trust and faith together, in my understanding it is different in some context. Trust most commonly used in relationship where as Faith is something used in spiritual context. There are lot many things to trust but only a few you can have faith in.

In term of theism and atheism, both hold faith as Stanley Fish (American literary theorist) states; “Science requires Faith too before it can have reasons; and described the other as ‘a different faith community’ ”. Atheism is simply lack of belief in God. For Apistevists and such scientists, Faith in religion (theism) is without evidence. As a club there we can see Atheist Church which has features of religious congregation even moral, but abstain from any belief in a deity.