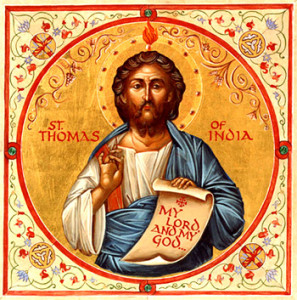 The Malankara Orthodox Syrian Church (Indian Orthodox Church) was founded by St. Thomas, one of the twelve apostles of Jesus Christ, who came to India in A.D. 52.

At least from the fourth century the Indian Church entered into a close relationship with the Persian or East Syrian Church. From the Persians, the Indians inherited East Syrian language and liturgies and gradually came to be known as Syrian Christians.

In the sixteenth century Roman Catholic missionaries came to Kerala. They tried to unite the Syrian Christians to the Roman Catholic Church and this led to a split in the community. Those who accepted Catholicism are the present Syro-Malabar Catholics. Later Western Protestant missionaries came to Kerala and worked among Syrian Christians; That also created certain splits in the community.

In the seventeenth century the Church came to a relationship with the Antiochene Church which again caused splits. As a result of this relationship the Church received West Syrian liturgies and practices.

The Church entered into a new phase of its history by the establishment of the Catholicate in 1912.

At present the Church is using the West Syrian liturgy. The faith of the Church is that which was established by the three Ecumenical Councils of Nicea (A.D. 325), Constantinople (A.D. 381) and Ephesus (A.D. 431).

At present the Church has over 2 million faithful with 30 dioceses all over the world.

The Catholicate of the Malankara orthodox Syrian Church >>