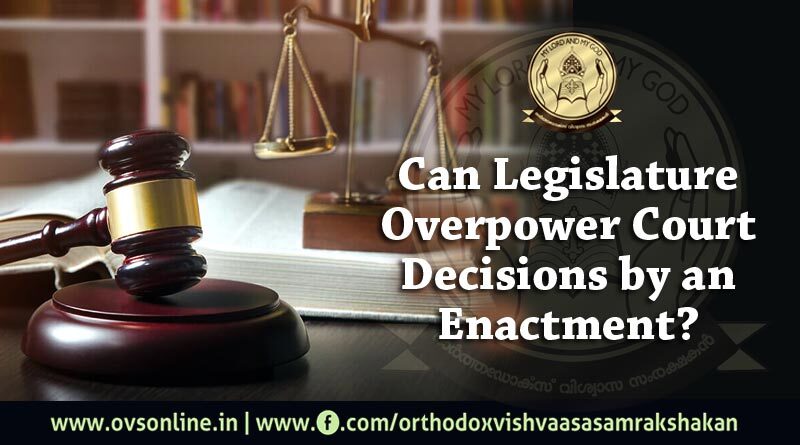 Our Constitutional jurisprudence accredits supremacy to the Constitution of India. The rationale of this proposition is that one of the three constitutionally recognised domains of authority, viz. Legislature, Executive and Judiciary, cannot encroach upon the others. Thereby, the court is the final authority to declare and interpret law, and it is not open to the legislature to simply brush aside findings of a court of law.

What Kind of Judgments Cannot be Nullified by a Legislation

Legislations cannot nullify judicial pronouncements of courts of law, in the following instances:

First, ‘Individual’ decisions, inter-partes. That is, it is not open to the legislature to directly set aside a judicial pronouncement either declaratory or conferring rights on the citizens. In other words, the rights and liabilities accrued by a person or a group of persons under a judgment cannot be deprived of such rights and liabilities by a subsequent legislative act.

Second, Judgments that interpret the law.

When Can Legislature Interfere with a Judgment

It is open for the legislature, in a limited sphere, to interfere with the judicial pronouncements. It is by altering the very basis of an earlier court-decision by making a new law retrospectively or by amending the existing law. The legal principles in this realm can be presented as under:

(i) If the decision of a Court is based on an enacted law which stood when the decision was arrived at, it is open to the legislature to enact a fresh law, or amend the existing law, with retrospective effect, which may fundamentally alter the very basis of such earlier decision; provided such new legislation or amendment should not be Constitutionally invalid.

(ii) Further, such changed or amended law should be one that can be applied ‘in general’, which would affect a class of persons and events at large; that is, it should not be for changing a particular court-decision inter-partes.

(iii) It is open to the legislature to remove causes of ineffectiveness or invalidity of a particular legislation in the existing law, or to remove the defect which the courts had found or pointed out. It can also be done to validate a particular law or for the implementation of the purpose sought to be achieved by the enactment. Here also, the new law or amendment should not transgress the constitutional limitations.

The judiciary and the legislature exercise jurisdiction in different compasses. This balancing act, delicate as it is, is guided by well-defined expositions of the Apex Court.

Commissioner HR & E Vs. Shri Lakshmindra Thritha Swaminar of Sri Shirur Mutt is the trailblasing decision handed down by the Supreme Court of India laying down the parameters to determine the fate and effect of an unconstitutional enactment. This decision, explaining ‘spiritual community represented by the math‘, is followed in all subsequent decisions in this field.

The Madras Hindu Religious and Charitable Endowments Act, 1951, passed by the Madras Legislature, practically made to vest administration of religious and charitable institutions in a department of the Government, head of which was the Commissioner. The Act gave vast powers to the Commissioner. Swaminar of Shirur Mutt questioned the Act in the Madras High Court. The Madras High Court accepted the case of Swaminar. The High Court found that several provisions of the Act were unconstitutional.

The Commissioner, Hindu Religious Endowments filed appeal before the Supreme Court. Supreme Court upheld the decision of the Madras High Court. Justice BK Mukherjea, writing for the Seven-Judge Bench, held that the spiritual community represented by the math falls under Art. 26(b) which contemplates ‘religious denomination or a section thereof’; and the right to manage the affairs of religion is a fundamental right under Art. 26. Such rights cannot be taken away by the legislature.

Legislation that Nullifies Judicial Verdict is an ‘Invitation to Lawlessness’

Cauvery Water Disputes Tribunal Case is the important decision in this field. Our Apex Court observed in this decision that the Karnataka Cauvery Basin Irrigation Protection Ordinance, passed by the Karnataka State, was unconstitutional. The Ordinance rebutted the jurisdiction of the Tribunal under the Inter-state Water Disputes Act, 1956; and it nullified the interim order passed by the Tribunal. The Supreme Court held that the Ordinance was against the basic tenets of the rule of law.

The Apex Court observed that the State of Karnataka, by issuing the Ordinance, had sought to take law in its own hand. It was laid down that such an Act was an invitation to lawlessness and anarchy. The Ordinance was a manifestation of a desire on the part of the State to be a judge in its own cause and to defy the decisions of the judicial authorities. The Ordinance foreboded evil consequences to the federal structure under the Constitution and opened doors for each State to act in the way it desired. It disregarded not only the rights of the other states but the orders passed by instrumentalities constituted under an Act of Parliament as also the provisions of the Constitution itself. It was also affirmed that the Ordinance, if allowed to stand, would lead to the breakdown of the Constitutional mechanism and affect the unity and integrity of the nation.

The interesting question came for consideration before our Supreme Court in M.C. Metha Vs. Union of India was whether the legislature can extend a time frame fixed by the Supreme Court. It was definitely pronounced in this case that the legislature lacked competence to extend the time granted ‘to seal premises in case of misuser’, by the Supreme Court, in the exercise of its law making power. The Apex Court observed that such an extension by the State legislature would be virtually exercising judicial functions which do not vest in the legislature. The Court proceeded to hold that the dignity and authority of the Court has to be protected not for any individual but for maintenance of the rule of law. It was predicated that the State was bound to act in terms of the decision of the Supreme Court.

Medical Council of India Vs. State of Kerala

Our Apex Court heavily criticised, by strong words, the act of passing an Ordinance by the State of Kerala in ‘Medical Council of India Vs. State of Kerala to overturn a decision of the Apex Court. The Admission Supervisory Committee of the Professional Colleges found that certain Medical College students’ admissions were illegal. The decision was upheld by the High Court of Kerala and the Apex Court. Thereafter the State of Kerala promulgated an Ordinance for regularising the admission of 180 students. The Supreme Court held that the State had clearly transgressed upon the field of judicial review and obviously resorted to a misadventure. It was laid down that the judgment of the court was nullified by the glaring arbitrariness. It was clearly an act violative of judicial powers. It was further asserted that it was not a case of removal of a defect in existing law; and pointed out that various Constitution Bench decisions have settled the principles of law governing the field. The Supreme Court exclaimed that it passes comprehension how the State has promulgated the Ordinance in question.

Law Declared By Apex Court Is the Law of the Land

Law includes not only legislative enactments but also judicial precedents. The law declared by the Apex Court is law of land, under Article 141 of the Constitution.

It is equally important that the authority of law under Article 141 ends when the statutory vacuum is put to an end. In any event, Article 141 cannot be applied to encroach upon the field reserved for the legislature, as observed in Union of India Vs. State of Maharashtra. Equally, it cannot also be construed as a provision conferring powers to ignore express statutory provisions. The powers under Article 141 are introduced for filling up the void created by an insufficient law so as to meet the ends of justice.

The Doctrine of Separation of Powers

In State of Tamil Nadu Vs. State of Kerala the Constitution Bench of the Apex Court dealt with the question as to whether the Legislature could set at naught the decision of the superior courts. The principles laid down, include the following:

(ii) Independence of Courts from Executive and Legislature is fundamental to the rule of law and it is one of the basic tenets of the Indian Constitution;

(iii) The doctrine of separation of powers between the three organs of the State – Legislature, Executive and the Judiciary – is a consequence of principles of equality enshrined in Article 14 of the Constitution of India.

The judiciary and the legislature exercise jurisdiction in different domains. But, as observed by Chief Justice Chandrachud in AK Roy Vs. Union of India (AIR 1982 SC 710) ‘our constitution does not follow the American pattern of strict separation of powers’. That is why the legislatures in India could ‘enact a fresh law with retrospective effect to alter the foundation and meaning of the legislation and to remove the base on which the judgment is founded’ as held in Cheviti Venkanna Yadav Vs. State of Telangana (AIR 2016 SC 4982).

Nevertheless, the legislature cannot make a law to overpower the findings of a court which were made in an ‘Individual’ decision, inter-partes.