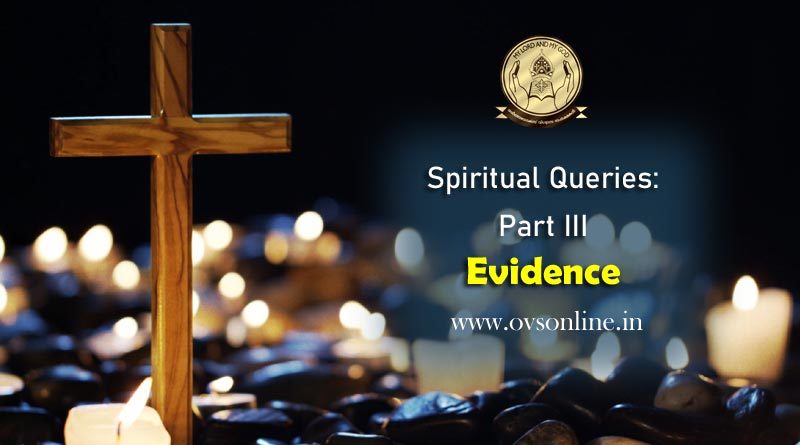 1) Science is evidence based where as theology is without Evidence. How far Theology is reliable as it is without evidence?
‘Evidence’: means ‘that which tends to prove or disprove something; Ground for belief etc.
Let us examine St. Mathew 12 :39; But he answered them, “An evil and adulterous generation asks for a sign, but no sign will be given to it except the sign of the prophet Jonah”.
Jesus calls the generations asking for Evidence / Sign as evil and adulterous. Here it means that Faith shouldn’t be Evidence- oriented. Evidence is not essential for Faith; Hebrew 11 gives a list from Hanok in which they obeyed God not because they understand God with Physical Evidence but by their firm Faith in God. This doesn’t mean that there is no evidence in Faith. Let us study in detail;
When we analyse the term Faith in Bible St. Paul is the one who gives an understanding of Faith which is mentioned in Hebrew 11 :1 “ Now Faith is the substance of the things hoped for, the evidence of things not seen”.

Points to be noted here:
• Faith itself is an evidence to understand God.
Generally Faith does not require evidence/proof. But as in Hebrew 11: 3; by Faith (as evidence) we can understand that ‘worlds were framed by the word of God…’
• As mentioned above Hebrew 11:3: “…the things which we are seen were not made of things which are visible”.
• Faith is not something which we can see through our five senses.

Though the scientific methods (like observations, data collections hypothesis testing and formulating theories) are formally accepted, the important scientific approaches are; Empirical/ natural evidence; rationalism /reasoning and skepticism. Similar to this we can adopt the same methodology in Faith which we can discuss here;

1.) Empirical /Natural Evidence:
It is the evidence which we can experience through our senses. This is the evidence in which Scientists rely mostly. How we can apply this to Faith? Natural theology is based on observed facts, reason and experience of nature; the creation reveals the Creator (Romans 1: 19).
“As a creature, man is capable of thought, imagination, forethought and critical assessment.” St. Gregory of Nyssa”. As psalm 46:10 says “Be still and know that I am God.” Thus the theology teaches that the real knowledge is possible by personal participation, experience and exercise which is available to everyone.

2. Logical reasoning or Rationalism:
The Science uses the logic’s to finalize its theories. I would say even the theologians do the same.
Theologians concentrate mainly on Old Testament, New Testament, patristic teachings, Christian traditions, biblical exegesis, rational analysis and argument. Let us see Peter 1:16; For we did not follow cleverly devised myths when we made known to you the power and coming of our Lord Jesus Christ, but we had been eyewitnesses of his majesty. It is not through the myths and fairy tales Bible/theologians come to a conclusion about an understanding of God. As St. James 3:17 mentions; But the wisdom from above is first pure, then peaceable, gentle, open to reason, full of mercy and good fruits, impartial and sincere. Biblical instances are moulded by traditional historical and cultural realities.

3. Scientific sceptic is one who questions beliefs on the basis of scientific understanding and empirical evidence. But as mentioned above empirical evidence can be seen in faith too. E.g. If I say I passed an exam only because God helped me. Can anyone counter, ‘No God didn’t.?No not at all. Again George E Moore English philosopher of ethics and morality viewed that “sense (moral) of right and wrong cannot arise from mere facts about the physical world. If right or wrong really do have an objective meaning, then the meaning must come from a realm outside the physical world.” So science has nothing to do with this and is beyond its realm. But there are many theists who are religious sceptics and are not anti religious or atheist but sceptical in certain beliefs or practices. Even we find sceptics who question the viability of religion for criticism.

In conclusion, both science and theology has its own methods of reasoning and formulating theories. Evidences for science and theology will be different. If we really need to know the realities of science and Theology follow the methodology of their own kind. Science has nothing to do with theology as it is beyond its realm. Recollecting a four line poem by Emily Dickinson;

“Faith” is a fine Invention
When Gentlemen can see –
But Microscopes (Science) are prudent
In an emergency.
Science is only a smaller factor of the larger picture and it is the “Faith” that keeps us going.