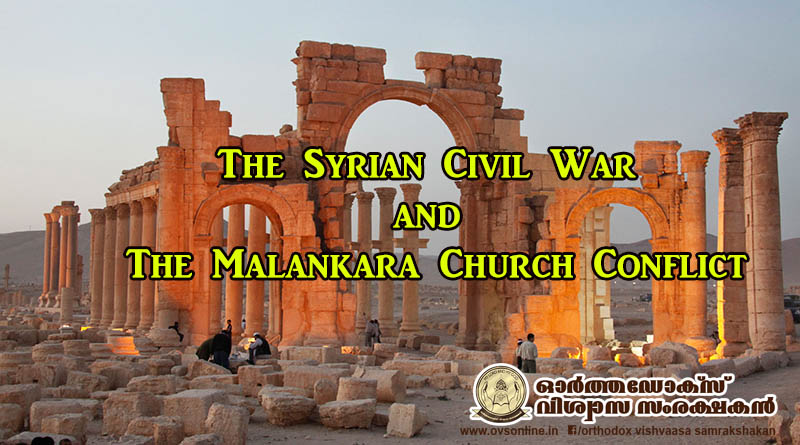 The ongoing Syrian civil war is one of the most disastrous events in the history of mankind. Christians and minority religious communities were persecuted to the maximum by ISIS and various terrorist groups. Christians supported the legitimate government under President Bashar Al-Assad. Despite the unimaginable sufferings, the Christian Churches and their leaders supported Assad. They vehemently opposed any sort of foreign intervention in Syria, their homeland.

Patriarch Ignatius Aphrem II supports the legitimate govt of Assad. While several Western groups criticized the support for Assad, the Syrian Christian Churches, and their leaderships remained in brilliant terms with the Syrian government. Patriarch Aphrem II, in particular, has been a strong supporter of President Bashar Assad.

In response to the criticisms raised, Patriarch Mor Ignatius Aphrem II stated – “We have not submitted ourselves to Assad and the so-called authoritarian governments. We simply recognize legitimate governments. The majority of the Syrian citizens support Assad’s government and has always supported it. We recognize legitimate rulers and pray for them, as the New Testament teaches us. We also see that on the other side there is no democratic opposition, only extremist groups.”

A Call to Reject Foreign Intervention

“We ask the United States and other nations to stop financing terrorist and extremist groups. Consolidated effort is needed to bring the situation back to normal. We urge all parties to make efforts for a peaceful resolution of the crisis,” – Patriarch Mor Ignatius Aphrem II.

Patriarch Ignatius Aphrem II has asked foreign governments and institutions to stop funding the terrorist and extremist groups and called for a consolidated effort by all parties for a peaceful resolution of the crisis in Syria. The Patriarch is well aware of the atrocities committed by various foreign groups by intervening in Syria in the name of ‘democracy’. Likewise, the Malankara Church rejects any sort of foreign intervention in her internal affairs. For the Malankara Church, any consolidated efforts for peace will be based on the 1934 constitution which is legal in India. Malankara Church is thankful for the help provided by the Syriac Church but rejects any sort of foreign intervention.

Irrespective of the international pressure, it is for sure that President Assad nor the Syriac Church will compromise anything to have a discussion with ISIS or any other terrorist groups (which includes a lot of Sunni Syrians) in order to allow them to occupy any territory in Syria because they fought against the legitimate government.

President Assad and his govt are legal in Syria and the Syrians will not accept any sort of alternative administrative system in the country. In India, no one prevents the Patriarchal fraction members from entering, worshiping or taking part in the administrate affairs of any of the disputed Malankara Churches. They are more than welcome, provided they recognize and accept the legal and legitimate 1934 constitution. President Assad is right for many and wrong for many others, but he is the legitimate leader of Syria. The constitution of the Malankara Church is right for many, whereas it is not acceptable for many others. However, the 1934 constitution is legitimate in India and its value and legitimacy must be respected. Those faithful and leaders who do not want to accept the Malankara Church or the 1934 constitution are free to move out and they are totally free to build a new Church for themselves.

President Assad belongs to the Alawite religious background. Alawite constitutes 11 percentage of Syria’s population, whereas the Sunni population dominates the country with 60 percentage (some sources states that they make up to 74 percentage of the total population). Sunni Islam is practiced by Arab speaking Syrians, Turkmen, Circassians, etc. The rest of the population belongs to Christianity, Shia Muslims, and other religious minorities. The majority of the population in Syria is ruled by the minority Alawite leader. This was one reason for the Sunni extremists to fight against Assad.

The Syriac Church, that is a minority in the country supports President Assad who belongs to a minority religious community but rules the majority Sunni community and others (because President Assad is the legitimate ruler in Syria). However, in India, the Patriarchal fraction leadership proposed that the parish Churches with the Patriarchal fraction majority cannot be moved under the 1934 constitution and they should be managed by themselves. The Supreme court’s verdict clearly states that all Churches in Malankara (with Patriarchal fraction majority or otherwise) must be ruled by the 1934 constitution. If the Syriac Church support and approve the legitimate President Assad Syria (who belongs to a minority religious community), why don’t they recognize the legitimate 1934 constitution for all Churches in Malankara, irrespective of the number of faithful?

It will be quite impossible for the Syriac Patriarchate to ignore the supreme court verdict and the law of the land. In Syria, India or elsewhere, the legal legitimacy and law of the land should be accepted and respected. The Syriac Patriarchate should at least make a genuine effort from their end to understand the reality that there is only one united Malankara Church.

error: Thank you for visiting : www.ovsonline.in
Go to mobile version