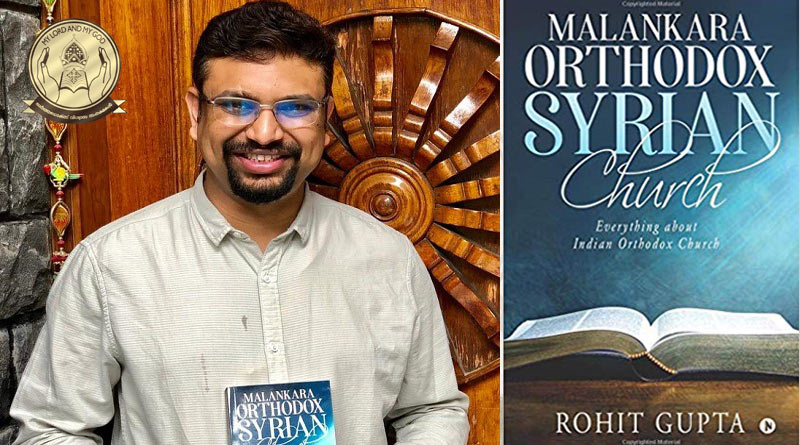 1). Please Introduce yourself.
My Name is Rohit Gupta, and I am 32 years old. I was born in Punjab, completed my education in Himachal Pradesh, and currently lives in Delhi. I am married to Medha, and we have a three years old son named Aarsh. I am a postgraduate and worked in the banking sector for four years. In 2014, I started my own business of fund management. Since then, I am trying to establish and develop my own company.

2). What motivated you to become an author?
One significant incident motivated me to become a writer. In April 2018, I was diagnosed by Septic Shock and was in a critical situation. After surviving that I thought that -” What would be my legacy if I suddenly die one day.” I decided to read and write books, and as a result, I published my first book titled “Live, Laugh and Travel Europe.” I read books whenever I can, and it helps a lot to overcome the trauma.

3). Tell us about your book on the Malankara Church.
The book is about Malankara Orthodox Syrian Church, also known as the Indian Orthodox Church. It is an autocephalous Church centered in the Indian state of Kerala. It is one of the Churches of India’s Saint Thomas Christian community, which has its origin in the evangelical activity of Thomas the Apostle in the 1st century. The current Primate of the Church is Catholicos of the East and the Malankara Metropolitan, presently Baselios Mar Thoma Paulose II.

5). What did you find unique about the Malankara Church?
As of my understanding, Malankara Church is the oldest Church in the world after Jerusalem. The Malankara Church provides a form of Christianity, which is Semitic in nature, and her culture is not far from the one that Jesus Christ himself experienced.

9). Did you travel to Kerala for the purpose of writing your book?
I did not travel to Kerala to write the book on Malankara Orthodox Church. I acquired most of the information from St. George’s Indian Orthodox Church, Leicester, England, and St. Mary’s Orthodox Syrian Cathedral, Kuala Lumpur, Malaysia. I met one person in Trivandrum (during a family trip) who is a faithful of the Malankara Orthodox Church, and I also consulted a Russian Priest named Father Saleh Gebretsadk, who cleared my doubts while writing the book.

10). What are your upcoming projects and what is the nature of your collaboration with the Orthodoxy Cognate Society?
I have written six books so far. The book “Malankara Orthodox Syrian Church” is my 4th book, (on 1st May 2019). I am planning to release two more books. I am also planning to start working on a book based on the ‘Ancient Silk Route.’

I have recently started my communications with the OCP Society. I have begun to collaborate on OCP research and publications, and also with the Center for Orthodox Studies (COS). I am hoping for further cooperation in future endeavors as well.

Order Rohit’s book on the Malankara Church on Amazon India >>, On Amazon International >>, On NotionPress Portal >> , On Flipkart >>