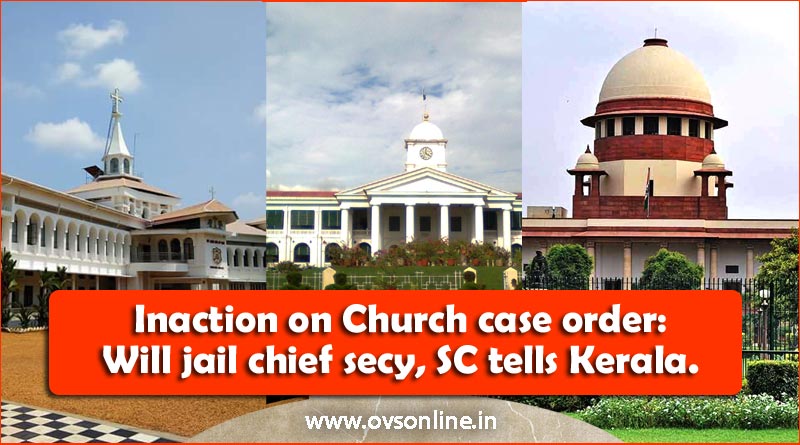 New Delhi: The Supreme Court (SC) on Tuesday blasted the state government and threatened to put the chief secretary behind bars for not implementing its 2017 judgement on a dispute between Orthodox Church and Jacobite faction on right to conduct administration and prayers in churches.

Justice Arun Mishra also said that the Kerala government is trying to over-rule the Supreme Court’s order passed in 3rd July 2017, which was in favour of the Malankara Orthodox Church.

It looks like the Supreme Court is at its wits’ end as the Orthodox-Jacobite Church case been dragged to the courtroom once again. The apex court was hearing the petitions in the St Mary’s Orthodox Church, Varikoli and St Mary’s Orthodox Church, Kattachira cases when Justice Arun Mishra pulled up the Kerala government for trying to delay the matter. He also said that the Kerala government is attempting to overrule the Supreme Court’s order passed in 3rd July 2017.

Although the dispute between the Jacobite faction and Orthodox Church in Kerala is decades-old, the Supreme Court, in 3rd July 2017, gave the Orthodox Church the legal mandate to administer more than 1,064 churches and parishes under the Malankara Church, as per the 1934 Malankara Church guidelines. However, the Jacobite faction strongly objected to this, further dragging the on-going conflict between the two.

Justice Arun Mishra also issued a warning that the Chief Secretary would be summoned and put behind bars if the Kerala government tries to invalidate the SC order.

He also said that the Chief Secretary of Kerala should be apprised of what happened to the Bihar’s Chief Secretary. He was alluding to the November 2018 matter where the Chief Secretary of Bihar was summoned to personally appear before the Supreme Court and explain why the state government did not take action against the 14 shelter homes where children were tortured and sexually abused.

Miffed over the status quo of the Kerala Church feud case, the justice asked if the state government is above the law and if it were trying to delay the implementation of the 2017 Supreme Court verdict. Pointing out that the Supreme Court cannot be tolerant any more in the case, the Counsel has been directed to inform the Chief Secretary of the matter immediately.